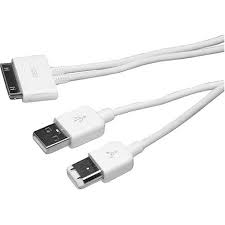 The software maker is part of a working group launched last week by the Consumer Electronics Association to develop a standard port for connecting gadgets like music players to audio systems in homes and cars.

“It is important for the industry to create an open, industrywide standard for docking connectors that will give consumers greater access to the digital entertainment they have stored on devices,” Jai Jaisimha, the lead program manager in Microsoft’s Windows digital media division, said in a statement.

It’s the latest in a series of moves by Microsoft to try to unify the many device makers and music sellers that use its technology.

Apple’s popular iPod already has a standard dock connector that allows all recent models to connect to speakers, car kits and other devices.

However, other music player makers, such as Creative Labs, Dell and iRiver, have designed their own ports. That makes it difficult for accessory manufacturers, which need to design add-ons that will work with the multiple formats.

We’re seeing iPod connectors in a number of places, but we need to remind ourselves that it is a proprietary connector. This is what kept Zip discs, and Betamax videotapes from ever reaching their full potential. While some autos, like BMW and Volkswagen ship with a connector for an iPod, many of us would welcome a competing standard. Same goes for those speaker docks that accept only an iPod. Wouldn’t it be great if they could just use something like a universal USB connector? I think that Microsoft may have found the chink in Apple’s armor if they can get the rest on board this standards train. In the meantime, Apple is running away with this segment with over 80% of the MP3 player market, and stores running out of iPods already this holiday season.
From CNET.