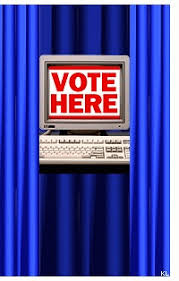 Tomorrow, I’ll go to my local balloting place which is conveniently located 2 blocks from my apartment.  I’ll walk there with the “prep” ballot I’ve already put together, which I’ll carry mostly due to an increasingly poor short term memory (yes on 87).  And there I’ll likely meander through lines, fill out some form incorrectly, then eventually find a place to fill out my ballot.  I have a lot of confidence that I won’t accidentally follow the wrong dotted line, and I predict no hanging chads.

But that’s just our civic responsibility.  That’s what we’re supposed to do.  David Cohn over at NewAssignment (a new web site dedicated to citizen journalism) put together a list of how we can go above and beyond our basic responsibilities, and actually participate in the process.  Here are a couple of my favorites:

I’m bringing along my digital camera, and I look forward to doing my job as a citizen.  For newer readers, I only became a US citizen earlier this year, and I’m glad to have my chance to fulfill the commitment I made.  I hope you do as well.

Take a look at David’s list – it’s even in an easy-to-consume “Top 9” format!

UPDATE: if you are one of the, say 95% of the mobile phone owners in this country whose phone is capable of storing or sharing video, take a look at the “Veek the Vote” service.  Read the comments below by Kemble and Rodger for more info, or skip that and just go check out the site.  Just be sure to vote tomorrow!